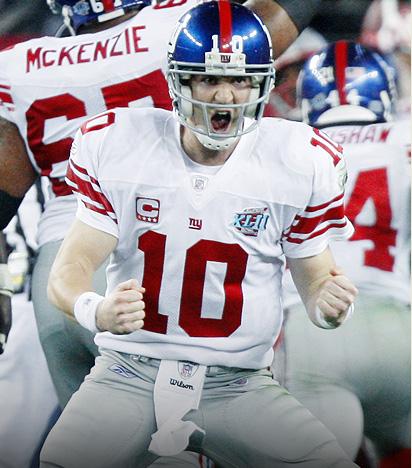 So this it it. Super Bowl Sunday. We’re almost free.

But for sports fans, there’s one last hurdle before we can really turn our attention to baseball. For 60 minutes tonight, the Giants and the Patriots will finish up the NFL season. And maybe, just maybe, the Giants can finish their stunning postseason with a victory.

Really, it goes beyond one title game. The Giants are playing for a region. Do we really want yet another sports team from Boston winning a title? Already, Celtics fans — with no concept of the East vs. West divide in the NBA — think they could witness their team bring home Boston’s third title this season. Last I checked, the Patriots haven’t even won yet.

So here we are. In two weeks, pitchers, catchers and just about everyone else will be in Tampa getting ready for the season. But today, we’re rooting for the Giants. Bring home a win; New York wants it.

So Lebron has a new shoe out, and its design will appeal to many of you:

I understand that Lebron is No. 23. But when you encircle that 23 in navy blue and add pinstripes in the background, well, that’s Don Mattingly. I wonder if James or his people thought about that before designing the shoe.

In other James news, he was caught going 101 mph on his birthday. How odd of a story is that nowadays? An athlete is pulled over for speeding excessively and he’s not drunk.

There’s a reason why no one plays baseball in January. About 30 minutes before kickoff, the temperatures in Green Bay are holding at zero with a windchill of -18. But that won’t stop the Giants and Packers from playing football.

A month ago, no one in New York would believe Eli Manning capable of leading the Giants beyond the first round of the playoffs, let alone to within four good quarters of the Super Bowl. But that’s where they are.

The Patriots won with their typical ruthless efficiency coming out in the fourth quarter today. So Big Blue could end up in a Week 17 rematch. Either way, Joe Buck — remember him? — will bring you the game. Feel free to discuss it here.

When it comes to sports, baseball is my game. Now and then, I’ll watch the Knicks give a pretty pitiful 48-minute attempt at playing basketball, and on Sundays, I’ll usually kick back with a Giants game on. But nothing tops my love and knowledge of baseball.

I can’t sit here and analyze tonight’s Giants game like I could for any Yankee game. I can’t reel off Giants trivia like I can for the Yankees. And I don’t feel a particular love-and-death sort of relationship with Big Blue as I do with the Yankee. I can stomach a Giants loss and move on with my Sunday. But when the Yankees lose, well, the world ends. Clearly.

But tonight’s game was one for the ages. Playing with in Dallas with a beat-up defense and a depleted secondary, the Giants managed to stop the Cowboys and return to the NFC Championship game for the first time since 2000. The only thing standing between the Giants and a coveted trip to the Super Bowl are the Green Bay Packers.

It certainly won’t be easy for the Giants to stop the Packers, but they could do it. The Giants have reeled off nine straight road wins right now, and as John Mara said, no one even expected them to make the playoffs this year, let alone win their first two games.

The Giants have already lost the Packers once this year, but then again, they had already lost to the Cowboys twice. Maybe Eli, the only Manning left in the playoffs, can step further out of his brother’s shadow and delivery the Giants to the Super Bowl. But win or lose, it’s been a great run, and I was genuinely nervous and excited as the clock wound down on that last-gasp fourth-quarter Cowboys drive. And in the end, it is comforting to see a New York sports team make and win in the playoffs this year. Here’s to hoping the Yanks pick up that mantle in October.

We haven’t spoken about our favorite third baseman in a while. And as the Yankees and A-Rod wrap up their contract negotiations, let’s check in on how New York’s favorite son is doing.

Selena Roberts, soon to depart The Times, checks in on A-Rod’s properties in Florida. He is not a very good landlord, she finds. In 2004, A-Rod, flush with cash and arriving in New York, decided to he wanted to invest. So he spent $58.7 million for properties in Tampa that, while aren’t slums, are not in much better shape.

Today, those properties are worth just – just – $46.3 million, and residents are none too impressed with the A-Rod management company:

A-Rod is the face on their leaky faucets, and yet his name isn’t in the welcome kit. Rodriguez’s brother-in-law, Constantine Scurtis, is the company manager — the one whose signature is on nearly $50 million in mortgages for properties in Tampa, according to records — but some of the cashiers and cooks who live at places like Newport Riverside know who holds their house keys.

To them, he isn’t A-Rod, a regular-season crackerjack on the verge of a Yankees deal potentially worth $300 million. To them, he is Tight-Rod, an apartment tycoon, who, renters say, has jacked late fees to $100 from $50 on units that run around $600 a month.

“He’s got everything, so why take money off our backs?” ” said Roberto Santiago, standing next to his neighbor, Ruiz.

Throughout the rest of the article, Roberts looks at A-Rod’s philanthropy and notes how he doesn’t stack up too well with Derek Jeter and Tiger Woods. His donations are meager based on his salary, and his big-ticket items have resulted in scholarships and stadiums named after him at the University of Miami. Whether you want to consider Roberts’ piece a hack job looking to tear down A-Rod or an honest assessment of an absentee landlord, it’s not a very flattering look at the future Hall of Famer.

In other news, A-Rod was supposedly hitting on Rumer Willis yesterday. Rumer is the 19-year-old daughter of Bruce Willis and Demi Moore. And, um, yeah, not so much.